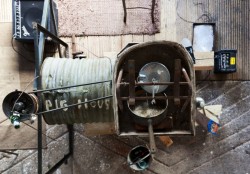 In May this year, Supernormal hosted its first one-week art & music residency at Braziers Park for six artists who had previously taken part in Supernormal festival. During the week, artists researched the unique history of Braziers Park and engaged with the site and community whilst sharing ideas, knowledge and inspirations together as a group.

For a glimpse of what took place on the residency, see the blog which includes revealing recordings, live-transmissions, images and texts by participating artists.

For the festival, artists will present new work that has been developed in response to their experience of the residency, as summarised below:

Jack Catling: Threshold Greeting
Jack will extend upon the Threshold Greeting piece which came about during the residency but this time will be utilising the perimeter of Brazeirs house. “What struck me on the residency was the way in which the building itself has been, from the very beginning, a container for a number of lives all seeking (Norman) Glaister’s ideal moment of communion. This brings to mind an idea of nested memory, each stone, each wooden panel, resonating with a shared intention, a moment of silent communication, waiting with baited breath for it’s moment. I wish to draw these invisible ghosts of intent out, giving them a fleeting physicality.”

Melanie Clifford: i/ii/iii
Melanie will present a work in three parts featuring observations, research and ideas formed during the residency and her experience of previous Supernormals. This will include a site-wide, distributed installation of multiple, small interconnected elements including sculpture, drawing, image and text; a one-off live performance of moving image and sound featuring a sequence of very short films and sound composed from aural and visual field recordings collected on-site at Braziers Park, and prowling – during the residency Melanie sought out and discovered a delight of hidden nooks and crannies. Join her for late night adventures and unique ‘guided’ tours around the grounds of Braziers Park.

Rebecca Lennon
During her time at Braziers Park Rebecca Lennon conducted a number of interviews with community members. For Supernormal she will present a new fictional narrative / text video based around the history and philosophy of Braziers Park and the School of Integrative Social Research.

The SamSam Big Band
In honour of The Pig and The Dirtpipe – as created during the residency – Sam Underwood and Sam Cook have been working together following the residency in the run up to Supernormal to build a selection of weird and wonderful musical instruments that will tour the festival site with a series of impromptu performances; recruiting extra members and working with other residency artists.

Lucy Woodhouse: Speaker Space
Lucy Woodhouse has created a DIY structure by combining various materials such as old tents, emergency blankets, and cling film. Powered using car batteries the space will house various electronic gadgets including a car stereo, a microphone, multiple speakers and a screen. Inspired while living with the community based at Braziers House, itself an ongoing experiment in cohabitation, this project’s aim is to act as an experimental self governing space for sharing, exchange and impromptu collaboration.