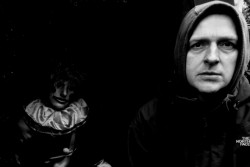 It’s now one meremonth to Supernormal 2016 – the seventh edition of the music and arts festival that consistently ventures beyond the point of sanity in pursuit of the transcendent. Completing the bill, we’re delighted to announce a rogues gallery of inspirations and iconoclasts in a wide range of different spheres.

Rounding off the music bill are Texas-via-San Francisco’s punk legends MDC (MILLIONS OF DEAD COPS) who will be bringing their inflammatory and righteous ire to Friday night, whilst JK FLESH – the dystopian beat-driven brainchild of underground legend and perpetual innovative force Justin Broadrick (Godflesh/Napalm Death/Techno Animal and Final amongst countless others) will be levelling the field on Sunday. Elsewhere, ew’re proud to bring you the like of revered British psychedelic institution ASHTRAY NAVIGATIONS, devastating binary hedonists GUM TAKES TOOTH, harp-wielding ethereal image-breaker AINE O’DWYER and mercurial psych-pop mavericks KNIFEWORLD, alongside treats and terrors the like of GIRL SWEAT, THE LOWEST FORM, CITY HANDS, DWELLINGS, ARVIND GANGA, CHRISTOS FANARAS and Leeds’ mind-melting duo GUTTERSNIPE

Elsewhere, we’ve been busying ourselves in somewhat inclement weather to create the new Vortex space – a freshly constructed wooden structure set to form a crucible of interdisciplinary extravagance, from talks to film soundtracks, from new collaborative pieces to workshops, broadening the spectrum of Supernormal still wider to enable sparks to fly and inspiration to manifest. Confirmations across this stage and others include commissions by CLUB DES FEMMES and FILM MATERIAL and MEDEA (feat. SERAFINA STEER & THE LONE TAXIDERMIST)

With everything from a Greek tragedy themed Mini-opera to a Prince and David Bowie themed karaoke event lined up, Supernormal 2016 looks likely to be the most diverse and spectacular yet, giving the assembled at Braziers Park both an embarrassment of riches and an antidote to turbulent times. Now as ever, for all the assembled the motto remains Love Each Other Or Die.

Remaining tickets are on sale now, at £85 for the full weekend including camping.