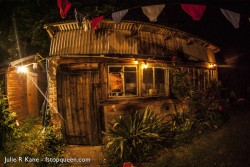 As you may be aware, rumours have been circling that Supernormal’s future is in doubt. In the name of transparency, we would like to take the opportunity to address these rumours.

2014 marked the 5th year of the festival and 20th year of the Braziers International Artists Workshop – the project from which Supernormal was borne. The artists who conceived, facilitated and put their hearts and souls into Supernormal, built a relationship with the Braziers community, and pretty much gave up their summer every year for the past 20, have decided to step down from from the organising team.

Bernie, Gill and Keran (fondly referred to as ‘the elders’) have been the backbone of Supernormal. Their vision of creating a temporary autonomous zone, allowing free creative experimentation, and engaging with Braziers’ history and spirit remains at the core of the festival’s identity.

Leaving the herd also is Tatty Sea Side Town (aka Colin, aka Papa C) who has played a significant part in the live music programming for the last three years. Colin has bought many amazing acts to the forefront that have helped shape the character of Supernormal. His hand drawn spreadsheets are things of wonderment, and he’ll be dearly missed.

So, with these departures our future was uncertain beyond this year – we just wanted to make SN14 ace. And it was… well ace.

This, however, has only fuelled the fire for the remaining members to make Supernormal happen again.

There has been lots (and lots) of collective discussing, reviewing, analysing, pondering and plotting to find ways of making Supernormal a more sustainable venture. To this end, we have recently become officially constituted as a Community Interest Company (CIC) – with you, the artists and audiences, as our community.

We would like to thank our loyal audiences for all the support over the years and we look forward to seeing your faces in a field in Oxfordshire next year. We also look forward to welcoming our departed team members as guests so they can have a bloody good time without having to do any work for a change (the bastards).

To cut a long story short, Supernormal 2015 is on!

So put 7-9th August firmly in your diaries and watch this space.